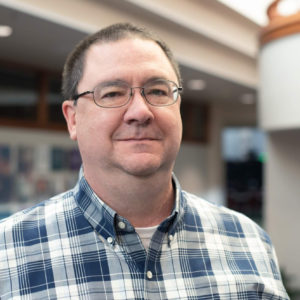 Steve is the Alliance’s first full-time Executive Director. He has come full-circle, as he was one of the founders of the International Day for the Unreached and the Alliance for the Unreached. Steve has served in leadership at a number of ministries since the 1980s, including Focus on the Family, Reach Beyond, Compassion International and Biblica. Steve’s heart burns for the unreached and he has a passion to see the gospel preached to every person on earth. “I can’t think of anything more important that I could be doing right now. Jesus told us to be His ambassadors to the farthest reaches of the earth so that everyone might have a chance to hear the gospel.” Steve and his wife, Christine, are long-time residents of Colorado Springs.

Ruth Kramer, Chair of the Alliance for the Unreached; Executive Producer of Mission Network News

Jon Fugler directs global content for TWR (Trans World Radio), a radio ministry that broadcasts the Gospel to 4.2 billion people each day. Jon spent seven years in leadership with Reach Beyond (formerly HCJB Global).  Before God called him there in 2011 to take the gospel to other cultures, Jon worked in non-commercial Christian radio in California.  He was the Executive Director of Logos Broadcasting (1994-2011), starting and operating stations along the California Central Coast.  Before that, Jon founded and led Shepherd Communications (1983-1993), establishing KLRD, which became the flagship station for the Air 1 Network. Jon has served as Director of Radio for Campus Crusade for Christ and has consulted with a number of ministries over the years in the areas of development, ministry impact and staffing. Jon has a passion to take the love of Jesus to unreached people groups.  He and his wife, Noonie, live in North Carolina.  They have three children and seven  grandchildren spread throughout the country.

Bill McCoy, Secretary of the Alliance for the Unreached; Sr. VP for Prayer Ministries, Seed Company

Bill has served in a variety of leadership roles at Seed Company and other organizations and companies. His heart for prayer is a key element in taking the gospel to the unreached. Bill and his family reside in the Dallas-Ft. Worth area.

Rob Myers, Treasurer of the Alliance for the Unreached; President and Chief Executive Officer of DOOR International

Rob was born in the Los Angeles, CA area to parents who were software engineers working on Voyager I and II. With mathematics in his blood, he studied physics, mathematics, and German as an undergraduate, and went on to earn a Masters and Ph.D. in Mathematics from the University of California – Berkeley. He worked as a professor of mathematics (and later Dean of Sciences) at Bethel College in Mishawaka, IN for ten years. It was at Bethel where Rob was first introduced to the Deaf community in 2005, and his life was forever changed.

Rob now serves as President and Chief Executive Officer of DOOR International. His passion is to see the Deaf trained and empowered to lead a movement to make Christ known and lead other Deaf into a relationship with Him. Rob supports DOOR through leadership in strategic planning, fundraising, partnership development, and program implementation in coordination with DOOR’s US board and DOOR’s International Leadership Team, a majority Deaf group responsible for establishing strategy and methodology. Rob is fluent in two sign languages (American Sign Language and Kenyan Sign Language) and conversant in three other sign languages.

In addition to his interests in math, language, and ministry, Rob has worked as a semi-professional violinist and plays four other stringed instruments. He and his wife, Michelle, have four boys and live in the Grand Rapids, Michigan area.

Greg has served as CEO of ​World Mission​ since 1997. A Grand Rapids, Michigan-based nonprofit focused upon providing hope to those living in the most unreached and persecuted nations in the world, World Mission has 75 employees and over 200 volunteers in the US serving the international ministry and running its seven thrift stores. In addition, Greg oversees an indigenous partnership network that is active in more than 25 countries, where he visits and speaks on a regular basis. World Mission’s primary tool of ministry is a solar-powered audio Bible (The Treasure) available in 6,000 different languages. Currently more than 1.5 million illiterate and oral-learning Muslims, Hindus and Buddhists are participating in World Mission listening groups. In addition, World Mission has a thriving water ministry, Zoe Waters, focused on providing clean water to those in the most vulnerable locations of the world. Greg’s greatest passion is his family, which includes his wife, Kathy, and their five children. They reside in Byron Center, Michigan. Greg is a graduate of Western Michigan University, where he was a team captain and MVP of the 1991 Bronco football team.

Steve and his wife Sharon moved to Venezuela in 1993 to serve as church planters among the Joti people, one of the last people groups to be discovered in South America. They began teaching God’s Word in early 1998. When the gospel was presented the entire village trusted Christ. Since then the Joti believers have grown in their faith and are carrying the gospel to the rest of their people spread throughout the jungle. Since 2006 Steve has served as an instructor at Ethnos360’s Wayumi program in central, PA. In addition to his role there, Steve also serves on the Executive Leadership Team and Board of Directors for Ethnos360.

Dave is known for his love for people, Chicago sports teams, anything barbecue, and hanging out with his family! Dave served for nearly 30 years with New Tribes Mission – a global church planting ministry that focuses on unreached and unengaged people groups without access to the Gospel. He has served in various leadership roles as Int’l Mobilizer, President of a Training Center, Director of Development, Mobilizer, and Mentor to new cross cultural missionaries. Speaking, training, and serving others in +70 countries over the past 35 years has given Dave a unique perspective on cultures, communities, and global causes. He has a passion for unreached people groups and children worldwide to have a healthy growing church in which to worship God. Dave is now focused on the vision of a church for every child by multiplying healthy churches among all peoples through children, youth, and families.

As a life-long learner, and aware of the changing global landscape, Dave has studied Global Leadership through Fuller Seminary. As a founding partner of ZimZam Global, Dave is impassioned with casting vision among global leaders; creating global opportunities for leaders to plant churches; and helping children, especially those with disabilities, to come to know, love and serve Jesus.

Dave and his wife Carolyn met in college in TN and have been married since 1984. They have three adult children, one of which has special needs, one daughter-in-love and three precious granddaughters, one who is in heaven. They make their home in the Valley of the Sun in Phoenix, AZ.

Frontier Ventures collaborates with the Body of Christ catalyze movements to Jesus expressing the fullness of the Kingdom among the unreached Peoples of the world. As part of this effort, Jim directs the mobilization efforts to see Hubs developed in major urban settings which focus on the Unreached in their regions and beyond. Previously Jim served for 13 years as a missionary in the Philippines then served as a professor of missions, academic administrative leadership and mission organizational leadership. Jim wrote Teaming up with God: How God invades Pagan Culture. Jim, along with his wife, founded the NextGen Leaders Conference in 2003 for younger leaders growing in ministry capacity and serving in global service.

Since 2013, York has served as Marketing Director for OM in the US, managing domestic brand representation for multiple OM USA departments and initiatives. He is also Project Manager for the development of an OM International discipleship and church planting tracking app. With a dual degree in Marketing and Religion from Grove City College, and coursework in Graphic Design, York is passionate about bringing great ideas to life and bringing order to challenging business processes. York and his wife, Jenny, have served previously with OM onboard the M.V. Doulos, and now make their home, with their five children—Jake, Madeline, Grayson, Owen and Morgan—in Tyrone, GA. York is also an avid musician and serves as Worship Leader for their church.

John Pudaite President and CEO of Bibles For The World

John, the son of Dr. Rochunga and Mawii Pudaite, was named President of Bibles For The World (BFTW) in May, 2015. He previously served BFTW since 2006 as the Vice President for International Ministries. He also served for seven years as the Executive Vice- President (COO/CFO) at BTFW’s Colorado Springs headquarters. John was installed as President in May of 2015, succeeding his parents to lead the ministry for the coming decades. He oversees ministry activities both in India and around the world. John is also an award winning filmmaker and is passionate about appropriating new technologies and sustainable development to help advance the cause of Christ.

Heath Hale, Co-Founder and Board President of The BLESS Foundation

Heath is the co-founder and Board President of The BLESS Foundation. He grew up in a family of auctioneers and has been developing this unique craft since childhood. He and his team at Cowboy Auctioneer have raised over $160 million for non-profits and community causes across the world. Heath’s passion for making an impact for God’s Kingdom and serving the vulnerable, combined with his auctioneering talent and vast experience in fundraising, led him to founding The BLESS Foundation with his wife Tabitha in 2017. In just 5 years, BLESS has funded grants across 35 Unreached countries, helping provide access to Christ among more than 160 Unreached People Groups. Heath is a Texas State Bobcat graduate, Austin Ridge Bible Church member and an avid world-traveler. Heath lives in Austin, Texas with his two daughters and wife, Tabitha.

Marv has served the missions community for over four decades. On the field in Indonesia with TEAM, as the Executive Director of Cross Global Link, professor of missions and intercultural studies at Moody Seminary, and as Vice President of Missio Nexus, where he now serves part-time as Ambassador at Large. Marv has also authored a number of missions books, including his most recent, A Third of Us: What It Takes to Reach the Unreached. He and his wife, Peggy, live in Michigan. Marv was a founding board member of the Alliance for the Unreached and served as our first Executive Director.

As a CCNL (Certified Christian Non-Profit Leader) and Enneagram Coach, Mark collaborates with Christian leaders who want Gospel Access for All. Those who know him best call him a passionate equipper, super-connector and a Go-Giver/Growth Giver.

Mark wants everyone in the world to have access to the Good News of the Gospel. An accomplished and integrity driven leader with more than three decades of success in advancing Christian ministries and leading teams in the areas of international missions, Christian Media, Christian higher education, Healthcare and Churches.

Mark produces and hosts the daily ”Unreached of the Day” podcast sponsored by Joshua Project; in addition, Mark’s weekly  “Two-Minute Tuesday” reports on courageous Christians showing compassion among the Unreached.

Wayne Pederson, Advisor to the Board and Executive Director

Wayne began his radio career in 1967 as an announcer on KTIS in Minneapolis. In 1997, he was promoted to Executive Vice President for Media at the University of Northwestern in St. Paul, Minn. During those years Wayne also served on the board of NRB, and as Executive Director of the Christian Music Broadcasters and President of the Mission America Coalition. In 2004, Wayne was hired by Moody Broadcasting, where he eventually became Vice President of Broadcasting. In 2008, God called Wayne to serve as President of HCJB Global, now Reach Beyond. Since “retiring” in 2016, Wayne has been serving on the boards of several international ministries. Wayne and his wife, Willi, live in Florida, and enjoy spending time with Wayne’s two daughters and nine grandchildren.